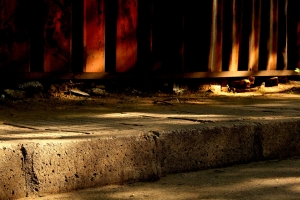 “You’ll be nothing – you’ll end up sweeping the streets, Rodney! Well, what’s wrong with that? Why shouldn’t I sweep the road if I want to? A teacher should have no right to say anything like that. What’s more important – a judge or a road-sweeper? We need both! Every other person wants their child to be a doctor or a lawyer – shouldn’t we just want every person on earth to be educated? Then everything else should take care of itself…”

Street-sweepers are an important part of the calm here in Plovdiv. They grace each morning with their fluorescent vests, always too big, over colorful gypsy clothes. The sound of the brooms is soothing compared to the hideous leaf-blowing machines we get in NZ. Skrp, skrp, skrp… they don’t look up. But neither do others. Crossing eyes for the sake of a silent hello is not something you do here. The leaves, the berries, the cigarette butts – all disappear before breakfast.

Drawing parallels between assigned values in society and assigned values in music. Singing in a language that you don’t (at first) understand, gives each vowel, consonant, syllable, word, phrase… equal value. That is part of the attraction – it is just music! All of it.

When I write lyrics myself and come to sing them, however, I tend to prioritize some words, at the cost others. For example, ‘the’.  An untapped sound potential?  Or a hair stuck on your tongue, followed by a sort of guttural grunt? (Particularly if we are allowing ourselves to sing with a Kiwi accent…)

Actually, this incarnation of the vowel ‘e’ is not so far removed from the ‘ъ’ (er-golyam) in Bulgarian language – which I have had to learn to sing with beauty, as there is no discrimination upon which vowel you might be landed with, to ornament properly.  The focus remains on bringing beauty and flow to ALL the vowels, treating them as the precious flesh of the music that they are.

A vowel isolation exercise I use – (sing your song without consonants) – reveals the color, placement, density and direction of each unique vowel. Things, that in the consonant clutter, would go by unnoticed. With this lucidity in hand, we are able to remedy hiccups in the flow, un-obstruct the vowels and ultimately, bring more joy through the music.

Intrigued by the THE train of thought, I decided to have a jam on it – Listen to it here  !